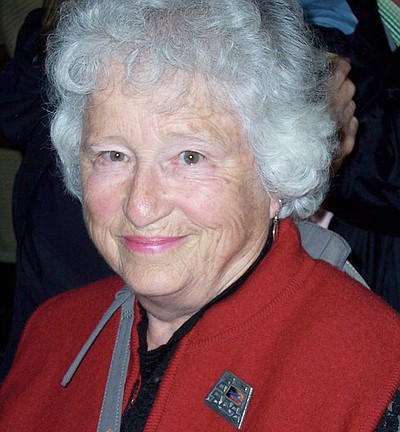 Jane Gaw was born in Peoria, Il., in 1930 and followed the family footsteps of her Army father around the country. After a heroic fight Jane succumbed to cancer on November 27, 2021 at CTH. She graduated from San Mateo High School and entered Mills College. At Mills she double majored in English and Art and was honored to become a member of Phi Beta Kappa Society.

An interesting event occurred early in her young adulthood. She was a Girl Scout counselor at Lake Kirkwood Girl Scout Camp and met the camp’s general maintenance man (Bob), who had just completed his first year at U.C. Berkeley. Four years later they were married and started their almost 70 years of married life. That life embodied a shared love of the Sierras, where they met, but also adventures of hiking, backpacking, and exploring the world.

She started her educator’s life at two-teacher school 15 miles west of Las Vegas, Nevada, in a little mining town of Sloan. She found success in her first year of teaching of grades 1-4, while Bob taught 5-8. When a similar position opened at Zephyr Cove at Lake Tahoe for both Bob and Jane, they jumped. It was a wonderful four years of teaching and building a home. Yes, she and Bob built their own abode! Michael was born in the last year at the Lake. Jane’s second son, Jeffrey, was born during her brief stay in Berkeley. The next jump was to Marin County, CA and Bob became principal of several schools and after 12 years became superintendent. Jane continued teaching, both elementary and special needs children and gave birth to her third son, Kevin. Three boys and Bob, a handful!

In the spirit of adventure, in 1970 the family moved to Kuala Lumpur, Malaysia where she continued teaching in an International School, edited a cookbook and collected aborigine art. On the sport side, Jane was an avid tennis player on grass courts plus golf. Then scuba diving became her top sport. She completed her Master of Art in Education from the University of Michigan, during this period.

Then in 1978, Jane and Bob were in an enviable position of taking a six-month holiday from work (all three boys were in U.S. colleges) and were touring the world when the call came from Saudi Arabia with a position that could not be turned down. Jane continued her teaching career now focusing on kindergarten, again, in an International School. In the 10 exciting years of Saudi living Jane became an advanced scuba diver and completed over 100 dives in the Red Sea, Arabian Sea, Mexico, Philippines, and several other oceans. In addition, she and Bob explored and skied throughout Europe.

Douglas Co, Nevada was the chosen location for retirement. Jane worked with an architect to design the future Gaw home, which was only an hour from beloved Lake Kirkwood where Jane and Bob met. They purchased a cabin on the Lake in 1968, which was considered “home” to the family. Jane loved both areas and participated in local activities. She was an avid hiker, skier, backpacker, plein-air painter, and wildflower identifier extraordinaire. The Reno symphony was close to her heart and participated as both a volunteer and avid listener. Another passion was a book club at the University Women’s Club. To say she was busy with friends and her passions is an understatement. It is with heavy hearts we say goodbye; we will miss her greatly. Jane is survived by her husband, her three sons and was an adoring grandmother of four grandchildren.

Jane loved dogs. During retirement three adopted dogs lived in our household. Jane requested, instead of flowers, she would like donations to be sent to:

A Memorial Celebration of Life to be held at a later date.