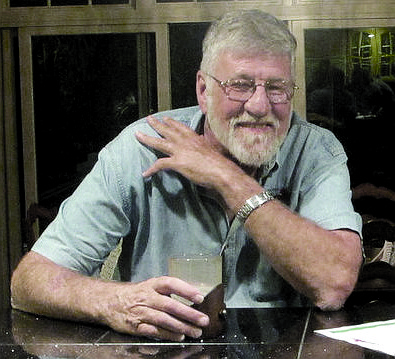 D. Gerald Bing, Jr. was born September 24, 1938 in Modesto, California. He was the son of Teddy Klepinger and D. Gerald Bing, Sr., who met at Stanford University. His grandparents, Dana and Anna Bing and Dr. Warren P. and Viola Klepinger, moved to California in the early years of the 20th Century, from Roslyn, Washington, and Dayton, Ohio, respectively. Gerry grew up in Sacramento, where he attended C. K. McClatchy High School and graduated from Stanford with a degree in Civil Engineering. Following the professional path of both his father, D. Gerald Bing, and stepfather, Paul L. Wilcox, Gerry worked construction in Alaska, all over California, and for the California Department of Highways. He served in the Marine Reserves at Camp Pendleton.

In 1965 D. Gerald Bing, Sr. moved to the Carson Valley, where he had learned to fly in 1945, and started Bing Construction/Materials Company. Gerry, then known as “Junior,” joined him and learned all aspects of the business before taking over at his father’s death in 1988. Before the advent of the big box stores in the north valley, Bing Materials was the largest generator of sales tax revenue in the Carson Valley. In 2005, he was recognized as Nevada’s Small Business Champion of the Year as recognized by the National Federation of Independent Business.

Gerry has been a prominent and respected resident of the Minden/Gardnerville community for over 50 years as he served on the Minden Town Board as Director Emeritus of the Carson Valley Chamber of Commerce, as President of the Douglas County Building and Industry Association, and in 2007 was named Citizen of the Year by the Elks Lodge. He ate lunch at the Country Club every working day for all those years. When he wasn’t working, Gerry could be found playing golf, driving his yellow Chevy El Camino, listening to jazz, or enjoying a Cutty on the rocks.

Gerry was formerly married to Nancy Jahn and Jerry Mistak, and lived for many years with Pat Nelson, all of whom predeceased him. He leaves his daughter Jamey Taylor (Michael), son Dana George Bing, grandchildren Patryk and Danaell Bing, Aidan and Mason Taylor, sister Diana Bing McLaughlin, and many nephews and nieces.

Gerry will be dearly missed by his family, friends, crew, and the community.

A celebration of life will be held in the spring of next year.