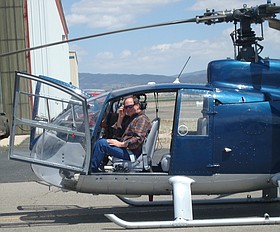 Steven Christopher Kreck was born April 25, 1943
and raised along with his three brothers, Douglas,
Jeffrey, and Terry in La Cañada, California, by
his parents Weston and Lillian Kreck. He was
preceded in death by his parents and his brothers
Douglas and Terry. He is survived by his fiancée,
Freya, his two children, Trent Kreck and Jenny
Bassi, his brother Jeff, and his grandchildren, Talen
Kreck, and Weston and Avery Bassi, and his niece
and nephews, Melisa Kunter, Loren Kreck, Drake
Hartley, Jared Hartley, and Casey Kreck.

Steve passed away peacefully in his sleep at his
home on Saturday, February 13, 2021.

Throughout his life, Steve had a love of adventure
and storytelling. In his younger days, after
attending Foothill Community College in Northern
California, Steve spent a season as a ski instructor
at Mount Shasta. He returned to Southern
California to start a family and join the California
Air National Guard, where he became an officer
and helicopter pilot. This began his passion for
flying. Eventually, he was certified for rotary wing,
fixed wing, amphibious aircraft, and multi-engine
aircraft, and had an instrument rating. He owned
two amphibious planes, including the famous plane
from the TV series Fantasy Island (“De Plane!”).
These sea planes opened the door for trips to the
Colorado River, lakes in Canada, and other remote
camping spots.

Steve moved to Carson City in 1975. As a partner
with his brothers in Southern Bolt and Screw, he
directed the building of a manufacturing facility.
Later, he served as the President of the Northern
Nevada Manufacturing Association.
Steve loved camping, fishing, whitewater rafting,
and water skiing. He and his brother Doug were
perhaps the first ever to ski the Carson River in
Carson City in the late 70s.

In addition, Steve and his fiancée Freya loved
to interact with people. And they loved dancing.
For years, they joined the folks at Glen Eagles
for live music, dancing, and camaraderie. Their
relationship never lost that aura of a young couple
in love.

Steve passed on his love of adventure to his
children, Trent and Jenny, as well as his unique
sense of humor. The two of them also share his love
of storytelling and, like their father, are cutting their
own distinct path in life.

Steve will be truly missed, but he left us with a
legacy of love and adventure, and he left his mark
on Carson City.

Steve hated to miss a good party so, three years
ago, he and Freya put together a “Pre-Mortem
Party” so that he could be at his own memorial
service. Consequently, the family has chosen not to
have a “post-mortem” memorial service.

In lieu of flowers, please consider contributing to
one of the following foundations in Steve’s name: