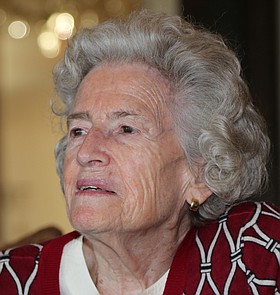 Alice Casazza Jacobsen passed away peacefully at her home in Carson City, on May 21, 2021, surrounded by her loving family.

Alice was born in Reno on October 30, 1928, to parents Anthony “Tony” and Rena Lagomarsino Casazza. Alice and her siblings, Ralph and Blanche, grew up on a 140-acre ranch in what was then southwest Reno.

Alice graduated from Reno High School in 1946, and attended the University of Nevada, Reno, for several years while working as a dental assistant. She married Everett Eugene (Gene) Corporon in 1951, and together, they had three children: Marc, Kent, and Kym.

In the early 1960’s, developers encouraged Tony Casazza to build a shopping center on the family ranch, and thus Shoppers Square was built on West Plumb Lane. It was the last part of the Casazza Ranch to be developed. In 1964, Alice became the manager of Shoppers Square, a position she held for the next 35 years. She was a true trailblazer as a single mother who was an accomplished businesswoman, at a time when this was a rarity.

Alice and Gene Corporon divorced in 1968, and in 1982, Alice married long-time family friend Harold Jesse Jacobsen, with whom she enjoyed 39 years of loving marriage. As Harold’s wife and First Lady of Carson City, Alice enjoyed a very socially active and productive life. She and Harold traveled extensively around the globe, but Alice was never happier than she was at home amongst the family she so adored. Upon her marriage to Harold, Alice inherited five stepdaughters: Cheri, Ardis, Loni, Jo Dee, and Marla. Alice did a wonderful job of blending the two families together. She kept meticulous track of all the birthdays and anniversaries of each of the family members, making sure no one’s special day was ever forgotten by hand-stitching the dates on a calendar proudly displayed in her kitchen. Despite her busy career at Shoppers Square, she loved hosting her family for large gatherings. Alice loved spending time with her family in her backyard picking fruits and vegetables and then turning her harvested garden into her amazing meals and baked goods. She made sure to make time to pass on the traditions of her Italian heritage, including making homemade ravioli.

Alice will be remembered for her generosity and thoughtfulness toward everyone she met. She always put the needs and wants of everyone else before her own, and she tried to make everyone around her feel special. Alice brought fun and joy to everything she did and everyone she met, never dwelling on setbacks. As manager of Shoppers Square, she hosted the annual Magic of Christmas Parade in Reno, thereby ensuring that each wide-eyed child in the area could meet with Santa each year. Alice’s friendships with Gamma Phi Beta sorority sisters endured throughout her life, and she was an active member of both St. Therese the Little Flower Catholic Church in Reno and St. Teresa of Avila Catholic Church in Carson City.

Alice was preceded in death by her husband, the love of her life, Harold, who died in January; as well as her son, Kent; sister, Blanche, and brother, Ralph. She is survived by her children, Marc (Cynthia Crawford, MD), of Beaufort, SC; Kym (David) Jacobson of Newport, Oregon; stepdaughters Cheri (Lex) Adams, Ardis (Henry) Mohrschladt, Loni (Roger) Wolf, Jo Dee Jacobsen, and Marla Jacobsen. Alice also leaves behind 20 grandchildren, 25 great grandchildren, and numerous nieces and nephews. Alice’s legacy will endure in the memories of her devoted family, who will always cherish the time they had with her.

At Alice’s request, there will be no memorial service. Instead, a celebration of life will be planned for a later date.