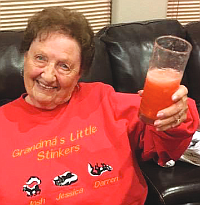 She was predeceased by her husband Donald Robert Reynolds, loving mother and grandmother.

She was born in Loma Linda California, raised in San Francisco and San Mateo. She graduated from Sequoia High School and lived in Hayward California with her husband Donald Reynolds. She worked at Hayward Unified School District as a secretary for 18 years until retirement. She moved to Gardnerville in 2006 to be closer to her daughter, son-in-law, and grandchildren. She spent the last year of her life living at the Chateau in Gardnerville, which she referred to as Shangri-La to her friends.

She is survived by her daughter Rhonda Vega, son-in-law Dale Vega, grandchildren and their spouses, Josh and Johanna Vega, Darren Vega/Heidi Esh, Aaron and Jessica Leising and extended family on her husband’s side.