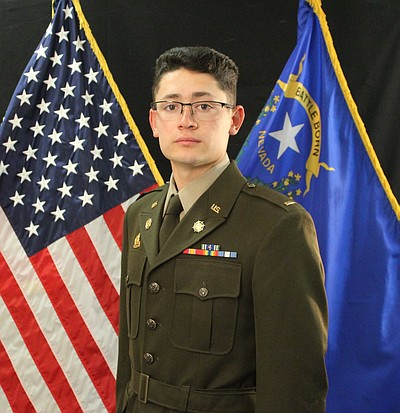 Murillo, a Reno native, was the Honor Graduate of the University of Nevada, Reno’s Reserve Officer Training Corps commissioning class of 2021.

“Second Lt. Nicollo Murillo was the ideal young officer and a true inspiration to the cadets of the UNR Army ROTC program,” said UNR ROTC instructor Capt. Alex Stackhouse. “We are devastated by his passing but take solace in the fact that he leaves behind a legacy in the young leaders that he influenced forever. They are leaders who will aspire to live the qualities that made Nico great and reflect his attributes of selflessness, professionalism, empathy, candor and a ceaseless pursuit of excellence.”

Murillo’s mother, Michelle Murillo, said her son’s life centered on family. He kept a watchful eye on his brother and sister and aimed to prevent bullying in his neighborhood. His favorite holiday was Christmas: He would annually decorate his house for Christmas on the day following Halloween.

Before earning his bachelor’s degree from UNR, Murillo attended Spanish Springs High School (Class of 2017), Shaw Middle School and Esther Bennett Elementary School. Upon his graduation from Spanish Springs High, he ranked second in grade point average in his class. Murillo first became interested in the Army while attending Spanish Springs
when he enrolled in Army Junior ROTC and joined the rifle drill team.

Also in 2017, Murillo enlisted in the Nevada Army Guard. While an enlisted Soldier, Murillo attained the rank of private first class in the 1859th Truck Company based in Reno. While with the unit, he received two Army Achievement Medals for exemplary service.

While at the UNR, Murillo entered the Army’s Simultaneous Membership Program that allowed him to take ROTC courses and work toward his goal of becoming an Army officer while serving in the Nevada Army Guard.

Stackhouse said that Murillo was selected to serve as the UNR battalion cadet command sergeant major during his senior year due to his impeccable attention to details and standards and his ability to inspire and motivate the university's cadets. He was also the top cadet on the
school's Ranger Challenge club-sport team.

Murillo is survived by his parents, Lombardo and Michelle Murillo; brother Luka Murillo; sister Anneliese Murillo; grandparents Tencha and Lomabardo Murillo, Gerry Elder and Linda Rice; and many aunts and uncles and cousins.

In memory of Nico, the Murillo family requests the consideration of a donation to the UNR Army ROTC Cadet’s Fund in the name of 2nd Lt. Nicollo Murillo. The fund is a non-profit and reserved for use by cadets in times of emergency. Donation funds can be forwarded to:
UNR ARMY ROTC
ATTN: Military Science
1664 N. Virginia Street
Reno, NV 89557