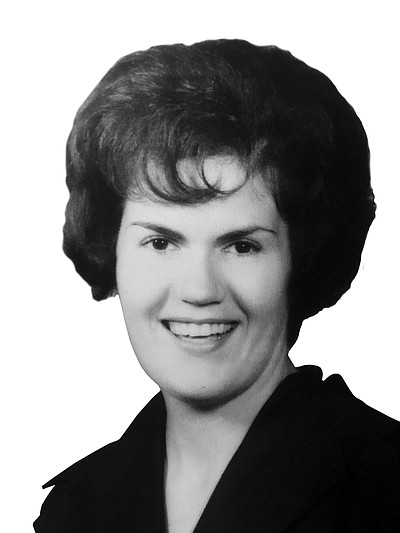 A resident of Carson City, Nevada since 1971, Janet (Jan) was born November 1, 1937, in Salt Lake City, Utah, to Wallace Henry Gardner and Mary Afton Watkins Gardner. After moving 17 times, the family settled in Spanish Fork, Utah, when she was about 4 years old. She attended schools there and graduated from Spanish Fork High School in 1955, after which she attended BYU, with a short interval at Utah State University, and graduated from BYU in 1959. While at the “Y” she had met her future husband James R. Anderson, (Jim) who had recently returned from the U.S. Navy at the end of the Korean War. They were married the day after Jan’s graduation.

Jan worked as a legal secretary throughout most of her college time then taught a year at Central Junior High School in Provo, Utah, helping put Jim through school. After the birth of Chris, she worked at home for the lawyers she had previously worked for. She and Jim had three children, Christian (Chris), Scott, and Mark, and Jan chose for most of their growing up years to be a stay-at-home mom, doing legal work from home or in the mornings while they were in school. She also taught night business classes at Western Nevada Community College. When the boys were older, she taught high-school business classes then English for over 20 years at Carson High School. She loved the students. She could often be seen at ball games, parades, and in the car or in an airplane grading papers.

She loved to write and some of her works were published. Her writing talents were often called upon for various programs and events at her church. She taught writing and loved to read her students’ work, which constantly amazed her.

She loved music. While living in Southern California she sang with a double trio, the Harmonettes, for many years, entertaining throughout the Los Angeles area. In Nevada she sang with the Sierra Nevada Chorale in their heyday and sang with them when they represented Nevada in Washington, D.C. at President Reagan’s inauguration. She was the piano accompanist for her church women’s group for many years. Her favorite music, however, was music that her children and grandchildren performed. She also loved sports. As a young teen she was on volleyball, basketball, and tennis teams. As an adult, she loved to watch football, baseball, and basketball, especially March Madness. Again, however, her favorite sporting events were ones where her children and grandchildren participated in.

Throughout her whole life, she was an active member of the Church of Jesus Christ of Latter-day Saints, where she served in many capacities, including Stake Primary Presidency, Stake Relief Society, Ward Relief Society President, Primary President in California, Arizona and Carson City, primary teacher, pianist, and stake missionary among other callings. She especially loved her 17 years of service with her husband in the Reno Nevada Temple.

She loved to do interior decorating, especially incorporating family heirlooms into tasteful home décor. She loved to draw, having illustrated several published children’s books, and to make interesting greeting cards and to do innovative gift wrapping. She also loved holidays, which meant decorating the house and having the family together for birthday celebrations, holiday dinners and Christmas Brunch.

There will be no viewing/visitation. Services will be held at 11:00 am on October 23rd at C-Hill Building, Church of Jesus Christ of Latter-day Saints, 1331 McKay Drive, Carson City, Nevada, with burial to follow in Austin, Nevada, at noon November 6th, near the burial place of her husband Jim and grandson Stephen.

In lieu of flowers, please consider making donations in Jan’s memory to one of the following: