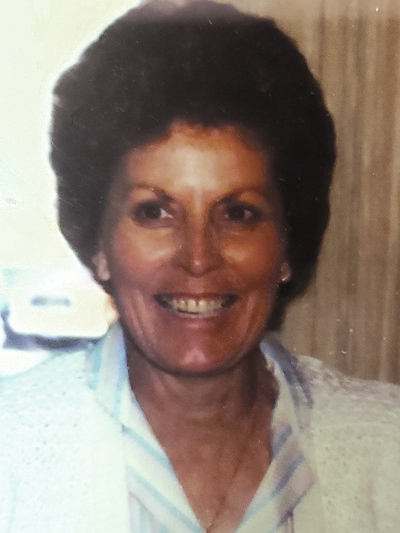 Patsy “Pat” Joan Frampton Etcheverry was born to parents William Vernon “Vern” and Chloe Geneva Frampton on December 7, 1935 in Milford, Utah. Pat was raised in Baker, Nevada until the family moved to Ely, Nevada in the early 1940s.

Pat married Gentty “Shanty” Etcheverry in 1955 and they made their home in Ely where their two children, daughter Patricia “Patty” (1956) and son Gene (1962) were born and raised.

Pat worked at Ely Light and Power while attending high school, thereafter, holding positions in local banks, the White Pine County Assessor’s Office and the U.S. Forest Service, Humboldt National Forest, Ely Ranger Office. Moving to Carson City, Nevada in 1977, Pat worked at the Bureau of Land Management, Carson District Office until her retirement in 1994 with 29 years of Federal Service. Pat cherished her co-workers in the Forest Service and BLM as she did her classmates in the WPHS Class of ’53.

Pat was a member of the Ely B.P.O.E. Does, Chapter 1469, AARP, Ely Basque Club, NARFE and the Ely Volunteer Firemen’s Auxiliary. In her spare time, she loved to read and crochet afghans for family and friends. Assisting with the Carson City Brewery Arts Center became a favorite pastime for her.

Pat loved to travel for her job and to accompany her husband when he traveled as the Mayor of the City of Ely and the Executive Director of the Nevada League of Cities. She especially enjoyed San Antonio, Texas, New Orleans, Louisiana and Washington, D.C. She loved to go “back home” to Ely for the holidays but truly would not hesitate to visit family anywhere in Nevada. Pat loved Western Nevada with Lake Tahoe being her favorite place.

She is preceded in death by her parents Vern and Chloe Frampton and a stepdaughter, Shauna Lavalee.

A graveside memorial service will be held at the Ely City Cemetery in Ely, Nevada. A celebration of life is pending, due to the COVID-19 pandemic.

The family would like to thank Prestige Carson Tahoe Expressions and A-Plus Hospice for caring for our loved one over the past several months.