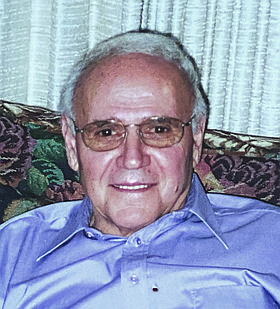 Sam Millazzo passed away peacefully with family by his side on September 14, 2021. He was 94 years old.

Sam was born in Chicago, Illinois on November 25, 1926 to Joseph and Angelina Milazzo. While in high school he lettered in track and football and graduated from Hinsdale (Illinois) High School in 1944 and immediately joined the Navy. He was trained in ordnance and served in the Pacific theater as a tail gunner in land-based bombers as part of an anti-submarine patrol. He was honorably discharged in 1946.

He met, courted, and married MaryJane Gordon on August 21, 1948 in Chicago. She had recently completed her nurses training as an RN. Their honeymoon was a cruise on the Great Lakes including Niagara Falls. He took advantage of the GI Bill and attended Humboldt State College in Northern California in Forestry and decided to transfer to Oregon State University in Corvallis, Oregon and changed his major to Wildlife Management. He graduated with a BS degree in Wildlife Management in 1954.

He applied to three west coast states and took the job offered by the State of Nevada as a junior district agent. He earned promotions throughout his career and his last job with the Department of Wildlife was as the Region 1 supervisor headquartered in Fallon. He worked for the Department for over 33 years.

After retiring in 1988 he and his wife traveled with friends and family. They spent a lot of their time with their children, grandchildren, and great grandchildren as family was very important to both of them.

He was preceded in death by his son in law, Dennis Cobb in 2000, his sister, Louise Orr, in 2009 and his wife of 67 years, MaryJane, in 2015. He is survived by his daughters Kathy (Dave) Carothers, Julie Cobb and Caryl Millazzo.

He was loved and admired by all that knew him and he is greatly missed.

There will be a private graveside service. Due to the current pandemic situation a Celebration of Life is planned for Spring 2022.