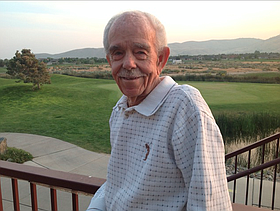 The hard working visionary with a big heart.

On a sunny and clear September Sunday morning at his home in Carson City, Garth Richards peacefully completed his life’s mission, one day shy of his 86th birthday after a brief illness. Known to most in Carson City for his accomplishments in real estate and development beginning in the 1960’s, he was also a classic car collector with an affinity for Cadillacs, a nostalgic admirer of 1950’s America, and more recently the forbearer of the Silver Oak Golf Course and Planned Community in northwest Carson City. Garth led a complete and satisfying life, helping many others do the same along the way.

He was born in Fielding, Utah in 1935 to Smith and Blanche Wood Richards both devout Mormons, the second of six children, and one of two boys. During this post-depression era, resources were scarce and all of the Richards children were expected to contribute to the family in a variety of ways. His younger brother Winston (Wink, to those who knew him) Richards, also of Carson City, preceded him in death in 2017.

Those that knew and loved Garth (nicknamed “Mother” amongst others) remember him for his colorful cowboy boots and jeans, his convertible classic cars, and most importantly his strong work ethic and endless ambition. He was a colorful dresser, a serial optimist, and always full of big and bold ideas, many of which he brought to fruition during his lifetime.

Never wanting to be idle, he had his first job at age 8, filling seed packets for 7 cents an hour at Cache Valley Feed and Seed. By age 11 he had a paper route delivering newspapers on his bike for the Herald Journal of Utah’s Cache Valley and worked on local farms and ranches during the hot Utah summers to earn extra money. During his teens, he held many other jobs, one of which was managing a local drive-in theatre in his hometown. There he sold tickets, ran concessions, washed car windows, and did whatever was necessary to operate the drive-in.

During November of 1951 and in a twist of fate for Garth, his father who was a civil engineer with the Bureau of Reclamation, was transferred from Utah to Carson City to work on the proposed Watasheamu Reservoir and Dam project, part of a $52 million regional plan for agricultural enhancements that eventually included the Stampede and Prosser dams. Plans for the Watasheamu Dam, which would have stored 160,000 acre feet of water between Mexican Dam and the California state line, were eventually scrapped and it was never built.

When Garth arrived in Carson City in 1951 he was a bit discouraged, as things in Carson were rather primitive compared to his hometown in Utah. At that time the only two paved streets in town were Carson Street and King Street. He pled with his Dad to move somewhere else, but they stayed and in 1953 he graduated from Carson High School, lettering in basketball. After graduating from Carson High, he moved back to Utah to enroll at Utah State University as an ROTC student. In 1957 he completed college with a degree in business as a Distinguished Military Graduate. He then spent the next three years in the U.S. Army, stationed in Nuremburg, Germany returning to Nevada in the winter of 1960. He enjoyed his experience in the military and throughout his life spoke enthusiastically about the adventure and excitement of those years.

After completing his military service in 1960 and returning to Carson, he obtained his real estate license and went to work for E.W. Miller and Sons, a real estate and insurance agency located at 602 North Carson Street. His first year in business was very slow and he almost decided to embark upon another career path, but things soon changed for the better and his ventures in the real estate and development business began to flourish. In 1963, he and lifelong friend Floyd Saltern, also originally from Utah, started R&S Realty in Carson City, which soon became one of the area’s most successful brokerages and soon expanded to a second location in Sparks.

In the late 1960’s he began a long series of successful partnerships building homes and developing apartments throughout Carson City but perhaps his most successful partnership was begun in 1964 when he met his future wife Joanie Presti, who at the time was a schoolteacher. Joanie was a native Nevadan from Lovelock and the two were married on March 16th, 1968. They started their family soon after, welcoming Todd into the world in November of 1969, and Sean in September of 1972. Throughout his life Garth openly expressed how grateful and fortunate he was to have married “the best woman in the world”.

Garth continued to experience success both personally and in business during the next 50 years. By 1973, Garth and Joanie had two sons, a good business, and the beginnings of an antique car and memorabilia collection that grew over the next five decades into a local legend. Garth built a number of Carson City subdivisions and apartment projects over the years, but his pride and joy was his last endeavor, the Silver Oak Planned Unit Development which featured nearly 1000 homesites and a golf course clubhouse decorated in his signature 1950’s style which features many items from his unique collection.

Garth enjoyed a vast array of wonderful experiences during his 86 years, and was always very grateful for the prosperous life that he had lived, and the family and friends he was able to share it with. During his time he had many charmed friendships and shared countless great times with Floyd (Sandy) Saltern, Ralph Dearden, Clete Wandler, Donn Simons, Kenny Guinn, Bob Banks, Jerry Gregory, amongst others.

He relished spending time at his duck club in Fallon both by himself and with his family. Opening day of duck season in the Fall was an annual event for him and he loved preparing for and sharing it with family and friends over good food, drink, and hunting stories. He also enjoyed fly fishing in his younger years and would fish the Truckee River or the outlet canal at Topaz Lake. Hunting, fishing, and camping were some of his favorite activities and this love rubbed off on his sons who share this same love of the outdoors to this day.

For many years, he traveled to Arizona in the winter, usually in January on the hunt for classic cars and memorabilia for his collection. Nearly every year he could be found attending the Barrett Jackson and Silver car auctions as well as various swap meets in the Phoenix area. He was a shrewd bargain hunter, methodically adding to what would someday become an impressive collection of classic cars and antique automotive memorabilia. Some of these artifacts are on display at his Silver Oak Golf Course Clubhouse in Carson City.

Garth was a fan of basketball and football and could be found in the stands cheering for the Wolfpack alongside friends and family. When he wasn’t attending the games, he was watching them on TV or listening to them on the radio. He missed the excitement of the live basketball games at Lawlor Events Center when the pandemic struck, and looked forward to resuming attendance in the future.

One of Garth’s lifelong pleasures was going out for dinner and drinks. Being the generous soul that he was, he bought many first rounds over the years and was the first to reach for the check when it arrived. Through the decades, you could find him at places like the Fireside, Enrico’s, Thurman’s Ranch House, Heiss Steakhouse, Carson Valley Country Club, JT Basque, and The Overland amongst other classic Northern Nevada establishments. He loved a good Picon, a margarita, or his old standby of Jim Beam and water. There might have been a few rough mornings along the way, but the socializing, camaraderie, and time spent together with family and friends meant a lot to him.

Both Garth and Joanie took great pride in giving back to the community over the years, making significant gifts to disabled and homeless veterans causes, the Carson Tahoe Hospital and Auxiliary, FISH, the Boys and Girls Club, Western Nevada College, and many others including local scholarships to Carson High students. Garth believed in loyalty, generosity, and integrity and he took good care of those around him. He opened doors for people and gave many their start in business. He took an interest in others who were struggling and did what he could to help. He was quick to assist those in need or to support a worthy cause in the community, always wanting to be an example of positivity and generosity.

Garth is survived by his wife Joanie Presti Richards, sons Todd (Kimberly) and Sean (Rachel) both of Tennessee, sisters Sandra Schank of Tallahassee FL, Camille Sakelaris (Angelo) of Reno NV, Cathy Gickling, (Ed) of Draper UT, and Janet Sutliff (Ken) of South Jordan UT as well as numerous nieces and nephews, friends, and colleagues. His kindness, generosity, sense of humor, and laughter will be missed.

Garth made it known to his family that when his time came, a celebration was to be had at his unique Silver Oak Golf Course clubhouse so that he could buy everyone one last round. The family invites you to a Celebration of Life in his honor at Silver Oak Golf Course located at 1251 Country Club Drive in Carson City on October 23rd starting at 2 pm. In lieu of flowers donations may be made to the Nevada Veterans Memorial Project at nvmp.us as Garth was a strong supporter of those who have served and sacrificed for our country in the military