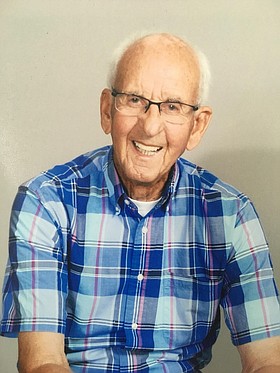 Art Wilson passed away peacefully of natural causes at the blessed age of 90.

Art was born in Reno to parents, Ace C. Wilson and Victoria Ramidez Wilson, and spent his first years in Reno and Silver City, NV, roaming the Comstock Mountains, where he inherited a passion for mining from his father. He attended high school in Dayton and graduated in 1949. He and his first wife, Mary, raised their four children, and a niece and nephew, who all at various times worked together in the family mining business.

Art was a successful businessman and employed many local residents through the years at the Art Wilson Company Gypsum Mine in Mound House. He retired and sold the mine in 2015. Art attributed his business success to the blessings received for honoring God’s 7th Day Sabbath, as he would always close for the sacred hours.

Art lived an extremely full and blessed life, and in 1985 married Irma Snijders, from Holland, and shared their mutual love for travel and adventure. He was very active in his faith and a longtime member of the Seventh Day Adventist Church. He looked for every opportunity to lead someone to the Savior and talk to them about life eternal. He loved doing missionary work and helping those in need. He had a very compassionate heart. You may have talked to him at one time or another, for he never met a stranger.

Until we meet again, he will be greatly missed and will forever remain in our hearts and in the cherished memories of his life well lived.