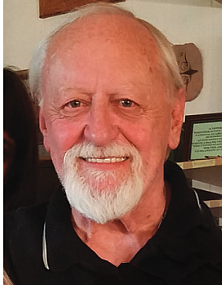 We regretfully announce the passing of Alan Charles Rogers, age 75, on March 19, 2022. Al, as he was fondly called, was born on December 25, 1946, in Amsterdam, New York to parents Harold Alan and Doris Mae Rogers.

His father, Harold, worked for General Electric and in 1961 the company transferred Harold to the facility in California. Al recalled fond memories of the excitement of his family traveling west across the country. The family settled in San Jose, California where Al would later become the head of maintenance at the Atari headquarters. After Atari closed, he began working for Verbatim. He moved to Carson City in 1987 and would work as management in maintenance for several companies including Bruce Industries, the State of Nevada Department of Corrections, as well as become the founder/owner of Big Al’s Good Time Pizza & Stuff.

Al served honorably in the United States Marine Corps Reserves from 1964 to 1970 in Alameda County, California as a Jet Engine Mechanic (Plane Captain). He was a Sergeant in the Marine Attack Squadron (VMA-133), the “Dragons,” where he primarily worked on the A-4 Skyhawk.

He was a longtime member of the Fraternal Order of Eagles as well as a member of the Carson City Raiders Booster Club. He served two terms as the President of the Raiders Booster Club from 2008-2009 and 2010-2011. Al had immense passion and enthusiasm for all things Oakland Raiders. He made lifelong “family” friends and shared many memorable
experiences attending games and events.

Al enjoyed playing pool, fishing, woodworking, and loved being surrounded by his sons and grandchildren. His infectious smile, quick wit, and outgoing personality made it impossible for others to not enjoy conversation with him. He will be forever remembered and forever loved.

Al was preceded in death by his parents Harold and Doris, and his brothers Charles, Bruce, and James.

He is survived by his wife of 16 years, Bonnie; his sons Joshua and Jonathan (Darlene); his eight grandchildren Rachel, Zachary, Cyrus, Bailey, Emmalynne, Asher, Ezekiel, and Jeremiah; his sister Sharon (Ron) Day; and his brother Robert (Earlene).