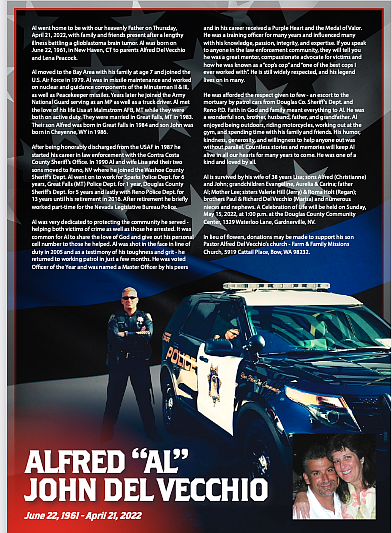 Al went home to be with our heavenly Father on Thursday, April 21, 2022, with family and friends present after a lengthy illness battling a glioblastoma brain tumor. Al was born on
June 22, 1961, in New Haven, CT to parents Alfred Del Vecchio and Lena Peacock.

Al moved to the Bay Area with his family at age 7 and joined the U.S. Air Force in 1979. Al was in missile maintenance and worked on nuclear and guidance components of the Minuteman II & III, as well as Peacekeeper missiles. Years later he joined the Army National Guard serving as an MP as well as a truck driver. Al met the love of his life Lisa at Malmstrom AFB, MT while they were both on active duty. They were married in Great Falls, MT in 1983. Their son Alfred was born in Great Falls in 1984 and son John was born in Cheyenne, WY in 1986.

Al was very dedicated to protecting the community he served - helping both victims of crime as well as those he arrested. It was common for Al to share the love of God and give out his personal cell number to those he helped. Al was shot in the face in line of duty in 2005 and as a testimony of his toughness and grit - he returned to working patrol in just a few months. He was voted Officer of the Year and was named a Master Officer by his peers and in his career received a Purple Heart and the Medal of Valor. He was a training officer for many years and influenced many with his knowledge, passion, integrity, and expertise. If you speak to anyone in the law enforcement community, they will tell you he was a great mentor, compassionate advocate for victims and how he was known as a “cop’s cop” and “one of the best cops I
ever worked with”. He is still widely respected, and his legend lives on in many.

He was afforded the respect given to few - an escort to the mortuary by patrol cars from Douglas Co. Sheriff’s Dept. and Reno P.D. Faith in God and family meant everything to Al. He was a wonderful son, brother, husband, father, and grandfather. Al enjoyed being outdoors, riding motorcycles, working out at the gym, and spending time with his family and friends. His humor, kindness, generosity, and willingness to help anyone out was without parallel. Countless stories and memories will keep Al alive in all our hearts for many years to come. He was one of a kind and loved by all.