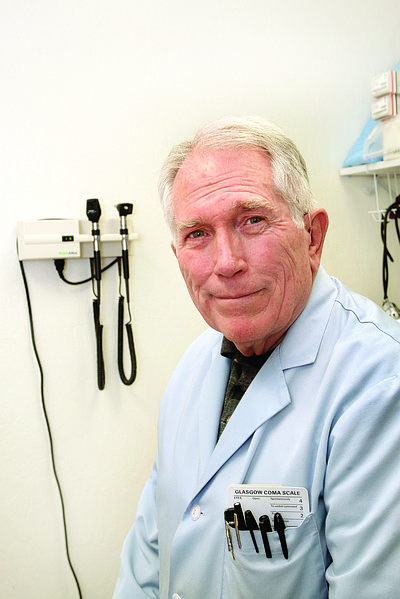 He attended local schools then attended the University of Oklahoma. At the age of seven, he knew he wanted to be a doctor. Rex did a “Combined Program” of college and medical school in seven years, graduating in 1962.

Rex did an internship at St. John’s Hospital, then was drafted into the U.S. Air Force. As a Wing Surgeon he was stationed in Alamogordo, New Mexico. He was also an Accident Investigator. After military service he completed a two-year residency at the University of Oklahoma Medical Center in internal medicine.

In June of 1969, the family moved to Carson City. He joined Jack Harper and Hank Davis, which later became Mountain Medical. Over the years a number of doctors participated in this practice.

In 1969 the University of Nevada Medical School was created, and he began teaching part time at the school. For nearly 50 years he served as a UNR Med clinical professor and Student Outreach Clinic volunteer, influencing the education and careers of hundreds of future physicians. Medical students honored him twice with the Thomas J. Scully Praeceptor Carissimus award, “beloved teacher.”

Rex was very active in many medical and community organizations.

He was preceded in death by his parents, his son Mark, and his brothers Everett and Bryce.

A “Celebration of Life” will be held on Saturday, August 27th at the First Presbyterian Church in Carson City at 2:00 PM. The service will also be live streamed. A reception will follow.

In lieu of flowers, please consider a donation to either of Rex’s endowment funds. The Carson Tahoe Health Community Fund, (to serve as a resource for patients and families facing financial hardship), 1600 Medical Parkway, Carson City, NV 89703 or online at carsontahoe.com/give. The University of Nevada Medical School, (to help medical students facing financial hardships), Mail Stop 162, Reno, NV 89557-0162; or via credit card by calling the Foundation at (775) 784-1587, or gifts online may be made at the following website https://med.unr.edu/give.