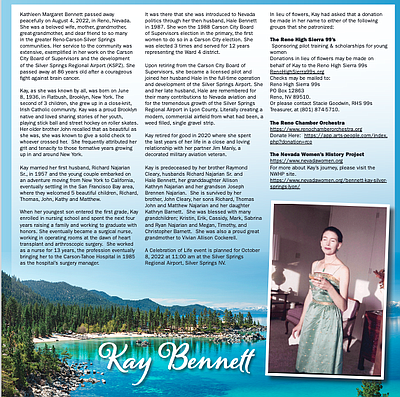 Kathleen Margaret Bennett passed away peacefully on August 4, 2022, in Reno, Nevada.
She was a beloved wife, mother, grandmother, great-grandmother, and dear friend to so many
in the greater Reno-Carson-Silver Springs communities. Her service to the community was
extensive, exemplified in her work on the Carson City Board of Supervisors and the development of the Silver Springs Regional Airport (KSPZ). She passed away at 86 years old after a courageous fight against brain cancer.

Kay, as she was known by all, was born on June 8, 1936, in Flatbush, Brooklyn, New York. The
second of 3 children, she grew up in a close-knit, Irish Catholic community. Kay was a proud Brooklyn native and loved sharing stories of her youth, playing stick ball and street hockey on roller skates. Her older brother John recalled that as beautiful as she was, she was known to give a solid check to whoever crossed her. She frequently attributed her grit and tenacity to those formative years growing up in and around New York.

Kay married her first husband, Richard Najarian Sr., in 1957 and the young couple embarked on an adventure moving from New York to California, eventually settling in the San Francisco Bay area, where they welcomed 5 beautiful children, Richard, Thomas, John, Kathy and Matthew.

When her youngest son entered the first grade, Kay enrolled in nursing school and spent the next four years raising a family and working to graduate with honors. She eventually became a surgical nurse, working in operating rooms at the dawn of heart transplant and arthroscopic surgery. She worked as a nurse for 13 years, the profession eventually bringing her to the Carson-Tahoe Hospital in 1985 as the hospital’s surgery manager.

It was there that she was introduced to Nevada politics through her then husband, Hale Bennett in 1987. She won the 1988 Carson City Board of Supervisors election in the primary, the first women to do so in a Carson City election. She was elected 3 times and served for 12 years representing the Ward 4 district.

Upon retiring from the Carson City Board of Supervisors, she became a licensed pilot and
joined her husband Hale in the full-time operation and development of the Silver Springs Airport. She and her late husband, Hale are remembered for their many contributions to Nevada aviation and for the tremendous growth of the Silver Springs Regional Airport in Lyon County. Literally creating a modern, commercial airfield from what had been, a weed filled, single gravel strip.

Kay retired for good in 2020 where she spent the last years of her life in a close and loving
relationship with her partner Jim Manly, a decorated military aviation veteran.

She is survived by her brother, John Cleary, her sons Richard, Thomas John and Matthew Najarian and her daughter Kathryn Barnett. She was blessed with many grandchildren; Kristin, Erik, Cassidy, Mark, Sabrina and Ryan Najarian and Megan, Timothy, and Christopher Barnett. She was also a proud great grandmother to Vivian Allison Cockerell.

A Celebration of Life event is planned for October 8, 2022 at 11:00 am at the Silver Springs
Regional Airport, Silver Springs NV.

In lieu of flowers, Kay had asked that a donation be made in her name to either of the following groups that she patronized:

Donations in lieu of flowers may be made on behalf of Kay to the Reno High Sierra 99s
RenoHighSierra99s.org