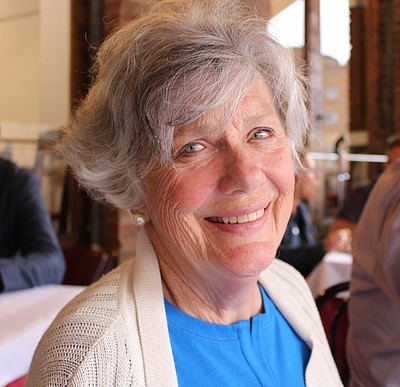 On November 22, 2022, Camilla Knox Jovicich passed away at the age of 83. Camilla was born and raised in Wichita Falls, Texas, the only daughter of Dr. Roland Knox and Catherine George Knox and the first of 15 first cousins whose kinship she cultivated throughout life. Always an adventurer and curious learner, Camilla earned a Bachelor’s degree from Northwestern University in 1961 and moved to Italy then France where she mastered both languages. She returned to the U.S. a year later, loaded her Volkswagen Bug and drove to San Francisco where she worked for Pan Am Airlines and ultimately met her beloved husband, John. They married and moved to South Lake Tahoe in 1966 and in 1977 to Gardnerville, NV where they built a home and wonderful circle of friends while partnering on their business, Cecil’s Market. She loved the Carson Valley and often said she could not imagine living anywhere that didn’t have mountains to break up the horizon.

Camilla was a lifelong learner who loved to travel, read, and discuss philosophy, spirituality, art, and politics. She related to people of all ages and brought a quick wit, keen listening, and warm smile to every conversation, often punctuating each exchange with an easy laugh. She was an avid gardener, interior designer, bridge player, and hostess, who cultivated friendships that lasted for life, including annual reunions with a dozen of her childhood friends from Texas and with her college roommates. She is survived by her husband of 56 years, John Jovicich, daughter and son-in-law Catherine and Wister Walcott and grandchildren Sarah and Zach, and son and daughter-in-law Michael and Teresa Jovicich. A celebration of her life will occur on June 16, 2023, with a separate announcement to be published later this spring.