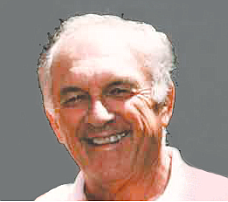 It is with great sadness we announce the passing of Patrick A. Glancy on December 7, 2021, in his home in Carson City, Nevada. At age 90, he lived a full life, frequently saying he chose the perfect wife and had been blessed with children he was proud of, a career he loved, and the very best of friends!

Pat was born to William J. Glancy and Anna (Planishek) Glancy on July 6, 1931 in Roundup, Montana. It was there he met Julie Simanich, whom he would marry in 1953. Together they raised three children, Pat “Skip”, Tim and Susan.

After high school graduation, Pat left his hometown to attend music school in Minneapolis, Minnesota. He later enlisted in the U.S. Navy and served on the USS Iowa during the Korean War, taking advantage of opportunities to travel and explore.

Pat graduated from Montana State University with a B.S. in Civil Engineering and an M.S. in Geology. His career with the U.S. Geological Survey spanned 38 years in Oregon, Washington, and finally retiring in Carson City. As a Research Hydrologist, Pat wrote many reports about water in Nevada; he especially enjoyed working outdoors and public speaking.

Pat had an endless number of interests – he was an avid reader, a jazz enthusiast, history buff, a talented photographer, bird watcher, and had an absolute love of science and nature. He also had an insatiable appetite for knowledge; one lifetime could never be enough time to
pursue the many things that fascinated him! Not only did he love to learn, he was genuinely enthusiastic about sharing and mentoring in his field, as well as with youth. Pat was friendly and social by nature, making lifelong, meaningful friendships. He was a member of
St. Teresa of Avila Catholic Church for 55 years.

Although he excelled in his career and the many diverse interests he pursued, his family will remember
him most for the many admirable qualities he lived by – honesty, humility, sentimentality, quick wit, and an incredible work ethic!

Pat was predeceased by his parents and his firstborn son, Pat “Skip”. He is survived by his wife Julie of 68 years, son Tim (Jennifer), daughter Susan (Bob), 3 granddaughters, 9 great-grandchildren, and his only sibling, sister Margie (Doug).

Pat will be deeply missed by his family and friends. However, our cherished memories will serve us well!

Per his wishes, a private family graveside service was held.