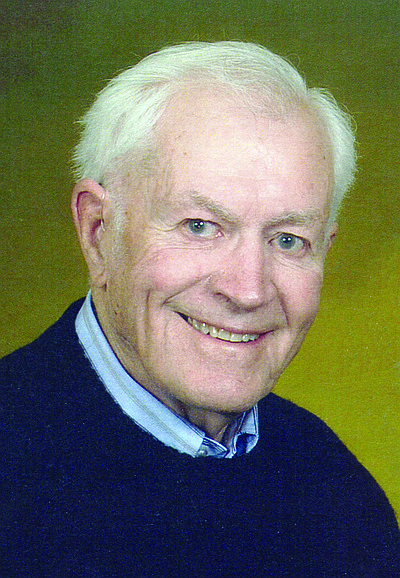 Chuck was born on a farm in Lansford, North Dakota on April 21, 1926. As a teenager, he worked in construction in the Midwest and on a fishing boat in Alaska. He joined the Marines at age 17 and fought at the Battle of Iwo Jima in 1945.

After Iwo Jima, Chuck returned to work on the family farm in North Dakota, while also attending Minot State Teacher’s College. He continued his studies at the University of Texas, studying for a degree in Architectural Engineering and an additional degree in Civil Engineering. It was at the University of Texas that he joined Phi Kappa Tau. At UT he also met Mary Anne Crawley, and they married in July 1949. Chuck’s academic pursuits led him to Harvard Law School. After graduating from Harvard in 1956, Chuck and Mary Anne and their children moved to California, and lived in San Diego, San Rafael, and Redding as Chuck continued his law career.

Chuck’s abiding commitment to community service is shown in his involvement in the Boy Scouts as a scoutmaster, sharing his love and knowledge of the outdoors with hundreds of suburban kids and later training other scoutmasters. He was passionately committed to racial equity and civil rights, including many different cultures in his scouting work, and challenging prejudice and hypocrisy wherever he encountered it, youth or adult. For his leadership he was awarded scouting’s highest honor in 1969. Educating youth about justice and fairness had become a central passion and in 1976 Chuck accepted a position teaching and creating a new paralegal training program at Southwest Texas State University in San Marcos, Texas. He also finished a PhD in Psychology at the University of Texas, capping off a passion for education that had spanned 34 years, six universities and six degrees. Chuck’s teaching career continued in Pittsburgh at Duquesne University in 1982.

Chuck and Mary Anne returned to California in 1984. In 1995, Chuck retired, and he and Mary Anne moved to Carson City, Nevada. There he began a new venture of writing about the West. His lifelong love of ranching and the cowboy life led him to create Pioneer Press and author an extensive series of historical books called “True Tales of the Old West.”

A Celebration of Life for both Chuck and Mary Anne is forthcoming in Spring 2022, with inurnment at Arlington National Cemetery at a later date. Friends and loved ones can read more about Chuck’s life and contribute to a digital memorial at https://obituaries.neptune-society.com/obituaries/sacramento-ca/charles-convis-10529531.

In lieu of flowers, donations may be made to your local Veterans Association or the Southern Poverty Law Center at https://www.splcenter.org/. Or better yet, take your dog for a walk and enjoy all of God’s wonderful creation, as Chuck did every day.