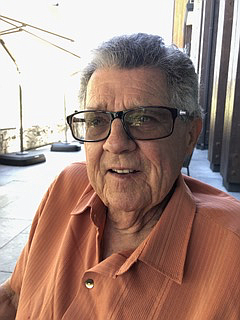 Jerry grew up in Whittier, California, Graduated from California High School. He worked for a family business, Spiveco, then went to work for Douglas Aircraft Co. in Long Beach. He retired in 2003, then moved to Gardnerville, Nv. Jitters got sober by attending Alcoholics Anonymous in 1980. He was a member of the “ Chino # 1” meeting. He continued to attend AA in Gardnerville, Nv. and surrounding area.

He was an active member of LifePoint Church in Minden, Nv. He believed that supporting children and youth ministries was the most important place for his financial support. He often said “ When the kids learn about Jesus, they never forget, even if they leave church for a while.” His favorite Charities were, LifePoint Kids and Awaken Reno.

Instead of Flower or donations to the family will you make donations to LifePoint Church, Kids ministries or Awaken Reno, 433 Spokane St. Reno, Nv 89512.

There will be a Celebration of Life at LifePoint Church, 1095 Stephanie Way, Minden, Nv,89423. Saturday, August 6, 2022, at 10:00 A.M. a reception will follow at the Spivey Home. Please dress backyard casual if you plan to attend the Church and the reception.