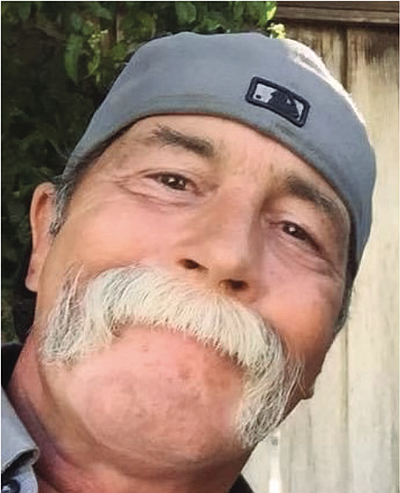 He was the son of Mildred Santoro (nee Koltzan) and George Tavish. He spent his formative years in Cupertino Calif. -- having attended Cupertino schools.

Paul worked in the automotive industry in the Sunnyvale/San Jose area for over 30 years.
He married Allison Miller on Aug.15, 1982, in a garden ceremony in Gardnerville Nevada.

In August of this year, Allison and Paul would have been married 40 years. Paul will be fondly remembered for among other things, his smiling eyes, his laughter, his “ribbing” of all, his feeding of the squirrels at VMC while awaiting his dialysis appointments, his love of all animals big and small and his confidence in his ability to TRY to fix everything. He was the ultimate
handyman, Paul loved his family gatherings and adored his Grandchildren. He enjoyed riding his Harley and did so until his many health maladies took over.

Paul is survived by his devoted wife, Allison his children, Paul Jason (Ashley), Jeanette, Jessica and James (Kalyn).. his grandchildren, Bradley, Braylon, Emmalee, Chloe and Luke, his siblings, Jimmy (Debbie), Mary Archie and his twin brother Peter, with whom he had
a special twin bond. Paul is also survived by numerous cousins, nieces and nephews, to include his niece Shannea Farias (Sergio l).

Paul took great comfort in knowing Shannea was there for him regardless of the time or day.
This includes Paul’s final days at Valley Medical Center when he needed family most.

Paul is also survived by many Grand nieces and nephews, to include Sergio ll (Tara), Isabella
and Sofia. Also surviving Paul is his Step-Mother of 49 years, Mary Burns of Gardnerville Nevada.

They had a mutual love and respect for one another and talked often. Paul enjoyed his many family vacations to the Burns Twin Lakes cabin - and was able to visit “the cabin” a final time last summer. Even though his health hindered his usual Twin Lakes adventures, he was happy to spend his last cabin trek with his siblings and other loving family.

Paul was predeceased by his Mother, Mildred Santoro, (nee Koltzan), his Father, George Tavish, his sister Susan, his maternal Grandparents, Amelia and Albert Koltzan and his paternal Grandparents, Mary and John Tevis. Paul endured many years of debilitating/serious
illnesses but he never once “caved” to them. He fiercely met them head on. Paul’s tenacity
to keep fighting was his mind set until his final days-- as he had “more things to do”.

The family would like to thank all of Paul’s medical caregivers during his prolonged and difficult journey. Please know, you are so appreciated.

Rest well, Pauly. No more dialysis.-- No more cancer. -- No more needles, -- No more pain YOU ARE FREE!! “JUMP ON YOUR HARLEY -- “GRIP” A GEAR AND FEEL THAT FAMILIAR BREEZE ENGULFING YOU AS YOU RIDE TO TWIN LAKES— GRAB YOUR FISHIN’ POLE AND HOOK THAT HUGE FISH THAT GOT AWAY” Paul is missed dearly by his family.

A celebration of life was held earlier this month in San Jose California.