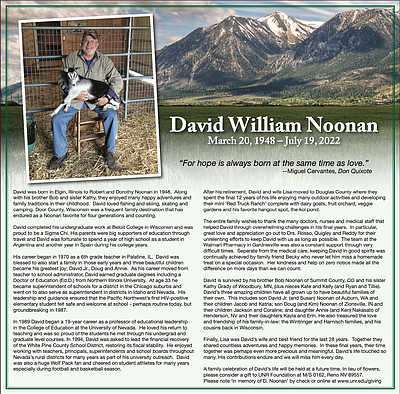 “For hope is always born at the same time as love.” --Miguel Cervantes, Don Quixote

David was born in Elgin, Illinois to Robert and Dorothy Noonan in 1948. Along with his brother Bob and sister Kathy, they enjoyed many happy adventures and family traditions in their childhood. David loved fishing and skiing, skating and camping. Door County, Wisconsin was a frequent family destination that has endured as a Noonan favorite for four generations and counting.

David completed his undergraduate work at Beloit College in Wisconsin and was proud to be a Sigma Chi. His parents were big supporters of education through travel and David was fortunate to spend a year of high school as a student in Argentina and another year in Spain during his college years.

His career began in 1970 as a 6th grade teacher in Palatine, IL. David was blessed to also start a family in those early years and three beautiful children became his greatest joy; David Jr., Doug and Annie. As his career moved from teacher to school administrator, David earned graduate degrees including a Doctor of Education (Ed.D.) from Northern Illinois University. At age 33 he became superintendent of schools for a district in the Chicago suburbs and went on to also serve as superintendent in districts in Idaho and Nevada. His leadership and guidance ensured that the Pacific Northwest’s first HIV-positive elementary student felt safe and welcome at school - perhaps routine today, but groundbreaking in 1987.

In 1989 David began a 19-year career as a professor of educational leadership in the College of Education at the University of Nevada. He loved his return to teaching and was so proud of the students he met through his undergrad and graduate level courses. In 1994, David was asked to lead the financial recovery of the White Pine County School District, restoring its fiscal stability. He enjoyed working with teachers, principals, superintendents and school boards throughout Nevada’s rural districts for many years as part of his university outreach. David was also a huge Wolf Pack fan and cheered on student athletes for many years especially during football and basketball season.

After his retirement, David and wife Lisa moved to Douglas County where they spent the final 12 years of his life enjoying many outdoor activities and developing their mini ‘Red Truck Ranch’ complete with dairy goats, fruit orchard, veggie gardens and his favorite hangout spot, the koi pond.

The entire family wishes to thank the many doctors, nurses and medical staff that helped David through overwhelming challenges in his final years. In particular, great love and appreciation go out to Drs. Rosso, Quigley and Reddy for their unrelenting efforts to keep David with us as long as possible. The team at the Walmart Pharmacy in Gardnerville was also a constant support through very difficult times. Separate from the medical care, keeping David in good spirits was continually achieved by family friend Becky who never let him miss a homemade treat on a special occasion. Her kindness and help on zero notice made all the difference on more days than we can count.

David is survived by his brother Bob Noonan of Summit County, CO and his sister Kathy Grady of Woodbury, MN, plus nieces Kate and Kelly (and Ryan and Tillie). David’s three amazing children have all grown up to have beautiful families of their own. This includes son David Jr. (and Susan) Noonan of Auburn, WA and their children Jacob and Katria; son Doug (and Kim) Noonan of Zionsville, IN and their children Jackson and Coraline; and daughter Annie (and Ken) Nakasato of Henderson, NV and their daughters Kayla and Erin. He also treasured the love and friendship of his family-in-law: the Wintringer and Harnisch families, and his cousins back in Wisconsin.

Finally, Lisa was David’s wife and best friend for the last 28 years. Together they shared countless adventures and happy memories. In these final years, their time together was perhaps even more precious and meaningful. David’s life touched so many. His contributions endure and we will miss him every day.

A family celebration of David’s life will be held at a future time. In lieu of flowers, please consider a gift to UNR Foundation at M/S 0162, Reno NV 89557. Please note ‘in memory of D. Noonan’ by check or online at www.unr.edu/giving