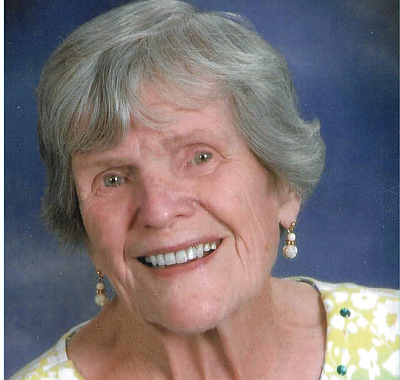 Betty passed away peacefully on December 21, 2022 in her hometown where she resided for 92 years. She was born June 18, 1928 to Joseph and Irma Schulz in Carson City.

Betty graduated from Carson High School in 1946 and was honored to be chosen the Prom Queen that year. Betty also had the distinction of being awarded for having “perfect attendance” from 1st grade through 12th, never being absent or tardy during those years. She started working as a secretary for the Carson City Court house, and later joined First National Bank as a teller. Betty met the love of her life and married Eugene “Gene” White on January 2, 1955. They had two daughters, Charlene and Debbie and four babies that died shortly after birth. While raising her two girls, during a time of need, Betty and Gene stepped up to raise her cousin Barbara’s daughter Brynette like their own. They celebrated 50 years of marriage before Gene’s death in 2005.

Betty was a longtime member of St. Teresa of Avila Church. She joined St. Teresa’s Guild in 1963, the same guild as her mother Irma. Later the Guild changed to the Women’s Society. Betty was the oldest volunteer member. Betty served as Executive President, President, Secretary and Treasurer for many years. She was also President of Church Women United.

She enjoyed volunteering for her church, was a Monday morning money counter for 48 years. She loved her garden, sharing their vegetables with friends and neighbors, enjoyed traveling in their travel trailer with her sister Mary and Bill and also loved camping with the grandchildren as well. Betty was an avid blood donor for many years. She cared for and loved so many without asking anything in return. She had a huge heart that will be carried on by her family and friends.

Memorial contributions may be made to St. Teresa of Avila Catholic Church or a favorite charity of your choice.

Burial will be at Lone Mountain Cemetery. Walton’s Chapel of the Valley is in charge of arrangements.