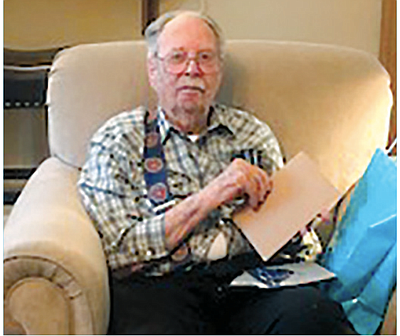 Our Dad Jack went to Heaven on December 13, 2022 to join his loving wife Mary.

Jack was an only child born to Jacques and Catherine Wyle in Los Angeles, Ca. He grew up in California and met his future wife, Mary Watts while he attended San Fernando High School.

Jack wanted to serve his Country and with his Mother’s written permission enlisted when he was 17 into the Marine Corps. He was a radio gunner with Marine Torpedo Bombing Squad 242. He served in Iwo Jima, Tinian, Saipan and Guam.

Our parents were married on December 27, 1945 while Dad was home on leave from the Marine Corps. They were married for 74 years before our Mother’s passing in 2019.

It wasn’t until 1994, long overdue that our Dad was awarded ten air medals and three Distinguished Flying Crosses for his extraordinary achievement while flying in 67 missions in the skies over Iwo Jima.

Dad was a building contractor and Mom was a real estate broker. After retiring in California they moved to Gardnerville in 2000 to be near their two daughters.

Jack is preceded in death by his Mother Catherine, Great-Grandson Ryan Walter and wife Mary.

A celebration of life will be held in the Spring