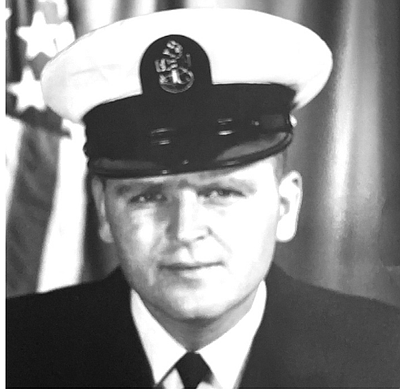 After the Lary household increased to 7 members, he left home at the age of 15 and moved to Houston, TX; he was employed at Carnation Dairy while continuing his high school education. With his high school diploma in hand he joined the Navy in 1952 during the Korean War at 17 years old. He served the Navy for 21 years as a catapult specialist and served on the following carriers: U.S.S Mindoro, Hornet, Ranger and the Kitty Hawk and completed 3 tours of the Vietnam War. While stationed at the Great Lakes Naval Airbase, he attended Roosevelt University in Chicago and graduated with honors receiving a B.S. in business administrations.

He then retired from the Navy as a Warrant Officer 3 after 21 years of military service. He began his second career in banking, beginning at First National Bank in Fallon, NV. He then moved to FNB in Minden, NV where he bought his beloved truck that moved with him to Carson City where he acted as District Manager for multiple branches of First Interstate Bank throughout Nevada. During his banking career he was president of Minden Rotary. He was president of Northern Nevada Development Authority and a member of Carson City Rotary. He was on the Board of Western Nevada Community College, and Board of the Carson Tahoe Hospital. He was also a member of the Nevada Toast Masters. Upon leaving the First Interstate Bank, Weldon worked for Sierra West Bank then ended his career by cofounding The Business Bank of Nevada.

Weldon Lary was predeceased by his parents, George and Opal Lary, his sister; Patricia (nee Lary) Eubank, and his first wife Nancy (nee Barsty) Lary. He is survived by the following family members: The love of his life, his wife of 22 years Janice M. Lary, who he travelled the world with and doted upon. His daughter; Lisa Lary (Duke), his son; Stoney (Jonnel) Lary, stepsons; Jason and Shane (Jessica) Bell, granddaughter’s; Emily, Lily, and Eva Bell. His sisters Vickie (Pat) Herring and Ray (nee Lary) and his brother Dickie (Joyce) Lary, all of whom live in Texas and many nieces and nephews.

He is remembered by his granddaughters as the man who made them sugared strawberries, oatmeal with too much brown sugar, and fruit salad that was somehow always in the fridge. He memorized “You Are My Sunshine” and sung it to them when they spent the night so they felt safe. He was immensely proud of his granddaughters and would tell anyone that asked, especially anyone at the gym that he went to everyday. He gave them a nickel for each bee they caught and a stiff 20 dollar bill for every good grade. He talked to them about his love for Texas and the Navy and urged them to follow in his footsteps. They will always remember driving in his truck to the farmers market or to school early in the morning. He was a great military man, a good banker, a noble man, but he was an exceptional “Papa”. He cared deeply for his family, his friends and his community. He made everyone feel special, celebrating their birthdays and achievements, but also reaching to people in their sorrows to offer condolences and support. He had a wonderful sense of humor and snap-trap memory. On Christmas Eve his daughter Lisa came upon a fortune cookie that read, “Every day is a new life to a wise man” and said to the family, “This is the way Dad lived his life.” He will be missed greatly by anyone that had the chance to meet him.

Per Weldons wishes, there will be no funeral. Weldon will be interred in the Carson City Veterans Cemetery with a family only burial. In lieu of flowers, please make a contribution in remembrance of Weldon Lary to one of the following: Hilltop Church, 3588 Romans Rd, Carson City NV 89705 or Western NV College.