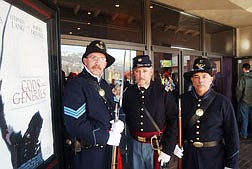 Harry Ehrman, left, Ken Auld and Richard LeVee stand in front of the Carson City Movie Theaters in an effort to recruit for the 2nd U.S. Infantry Company C Civil War reenactors. The movie God and Generals, based on the best selling novel and prequel to the movie Gettysburg that climaxes at the Battle of Chancellorsville in 1863, has sparked a new interest in Civil War reenacting which some of the enthusiasts hope to use to draw in new members. Photo by Brian Corley 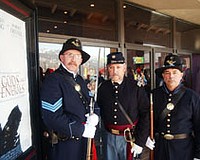