Rick Gunn/Nevada Appeal John Claudino of Aztec Manufacturing holds the machined aluminum parts he manufactures below the model train cars they will eventually become part of. 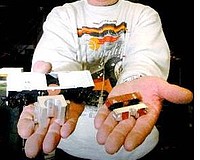 Made in Nevada Small business reports a profit in 2003

Aztec Manufacturing is tucked into an industrial area in northeast Carson City, where John Claudino both manufactures and sells his modified train cars. Although it's small, he's blaring a whistle in the model-train world. His niche business profited in 2003 like many other small businesses as the economy gained momentum, according to The Small Business Economy report put out by the Small Business Administration.