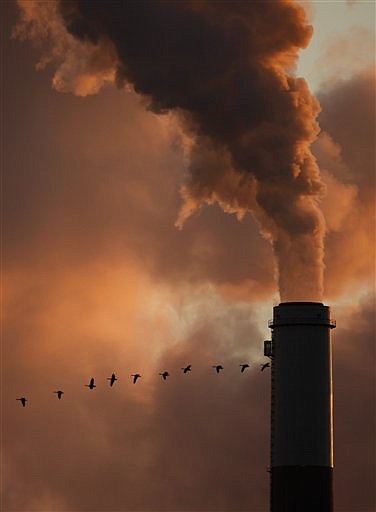 FILE - The Jan. 10, 2009 file photo shows a flock of geese flying past a smokestack at the Jeffery Energy Center coal power plant near Emmitt, Kan.. Sweeping legislation to curb the pollution linked to global warming and create a new energy-efficient economy is headed to an uncertain future in the Senate after squeaking through the House. The vote was a big win for President Barack Obama, who hailed House passage as a &quot;historic action.&quot; &quot;It&#039;s a bold and necessary step that holds the promise of creating new industries and millions of new jobs, decreasing our dangerous dependence on foreign oil and strictly limiting the release of pollutants that threaten the health of families and communities and the planet itself,&quot; Obama said in a statement on Friday, June 26, 2009. (AP Photo/Charlie Riedel, File) 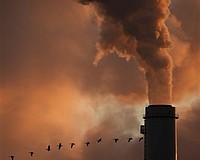