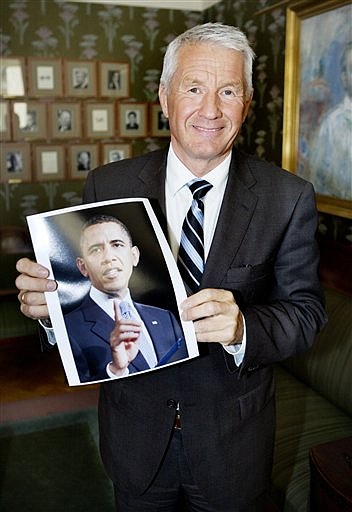 Chairman of the Norwegian Nobel Committee, Thorbjoern Jagland, holds a picture of US President Barack Obama, in Oslo, Norway, Friday, Oct. 9, 2009, after the announcement of Obama as winner of the 2009 Nobel Peace Prize. The citation for the award, in part says, The Norwegian Nobel Committee has decided that the Nobel Peace Prize for 2009 is to be awarded to President Barack Obama for his extraordinary efforts to strengthen international diplomacy and cooperation between peoples. The Committee has attached special importance to Obama&#039;s vision of and work for a world without nuclear weapons. (AP Photo / Jon-Michael Josefsen, Scanpix) ** NORWAY OUT ** 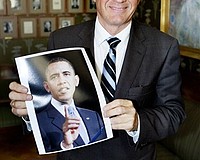