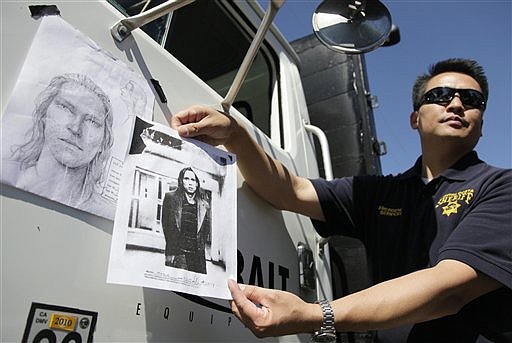 Jimmy Lee of the Contra Costa County Sheriff&#039;s office holds up a copy of Phillip Garrido taken after an arrest in Reno, Nev., alongside a sketch of a man believed to have kidnapped Michaela Garecht, outside Garrido&#039;s home in Antioch, Calif., Tuesday, Sept. 15, 2009. Police investigating two child abductions in the 1980s searched the Northern California home of a man charged with kidnapping a girl and holding her captive for 18 years. The Hayward and Dublin police departments went through Phillip Garrido&#039;s Antioch property and a site next door on Tuesday, seeking evidence in the disappearances of Michaela Garecht in 1988 and Ilene Mischeloff in 1989, authorities said. (AP Photo/Eric Risberg) 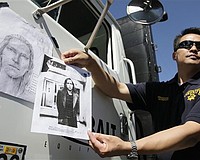