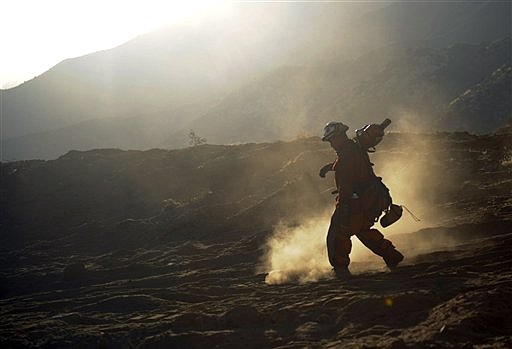 Inmate firefighter Henry Navarro, with the Mount Gleason Conservation Camp 16, stirs up dust as he walks to a fire truck after eight hours of fighting a wildfire in the Angeles National Forest near Azusa, Calif., Saturday, Sept. 5, 2009. On Aug. 29, the crews had just finished eating a Sunday dinner of salad, turkey and mashed potatoes with gravy when the fire appeared in a drainage area at the southwest edge of camp around 4:45 p.m. Within minutes, the officers decided the blaze had reached a &quot;trigger point.&quot; Around 5 p.m., Capt. Tedmund Hall and firefighter specialist Arnaldo Quinones radioed that they were heading back to the safety zone. They never showed. (AP Photo/Jae C. Hong) 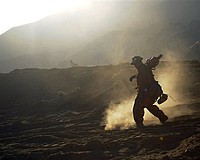