FILE - In this July 17, 2013 file photo, House Education Committee Chairman Rep. John Kline, R-Minn., left, followed by House Majority Whip Kevin McCarthy of Calif., walks to the House chamber on Capitol Hill in Washington. A deal that gives college students and their parents lower interest rates for loans is heading toward its final vote. The House was expected Wednesday to take up a bipartisan compromise that links student loan interest rates to the financial markets. Immediately, borrowers would see lower rates for classes this year than last, although the costs are expected to climb in coming years if the economy improves as expected. (AP Photo/J. Scott Applewhite) 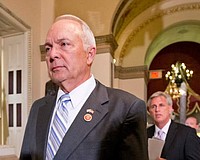