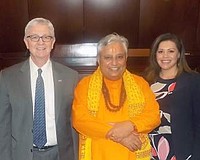 Both Nevada Senate and Assembly in Carson City opened with Hindu invocations on April 17, when verses from world’s oldest existing scripture were read.