FILE - This file artist rendering file provided by SpaceX shows a banner that will be used to promote a competition involving the Hyperloop passenger transport system, that billionaire Elon Musk suggested two years ago, that would zoom passenger capsules through elevated tubes. A California company set on building a futuristic, super high-speed transportation system announced Tuesday, Dec. 8, 2015, that it will build a test track in North Las Vegas. Hyperloop Technologies said it had chosen Apex Industrial Park as the site for its Propulsion Open Air Test, which will involve sending an electrical motor at more than 300 mph on a half-mile track.(SpaceX via AP, File) 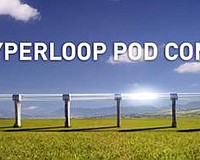 Hyperloop to test engine in Nevada