JetBlue&#039;s nonstop service from Reno to New York City begins in May. 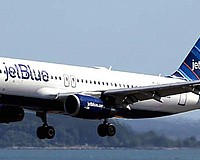 RENO, Nev. — John Checketts, director of route planning for JetBlue Airlines, had to take the long way to get to Reno from New York last weekend. Checketts caught a flight from New York City to Salt Lake City before eventually landing in Reno, and his return trip took even longer after a stop in San Francisco.