This front loader was used to cut the ceremonial ribbon opening the new 2.7 mile section of four-lane roadway on U.S. 50. The new section completes the four-lane portion of U.S. 50 from Stateline to Carson City, opening expressway traffic to Nevada valley cities. Officials representing the cities of South Lake Tahoe and Carson City and officials of the Nevada and California highway patrols lead a caravan of cars over the new portion of roadway to open it. 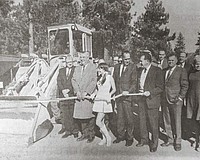