Fallon, which lost 28-12 to Truckee on Saturday, hopes to renew its winning streak against Wooster tonight at 7 p.m. 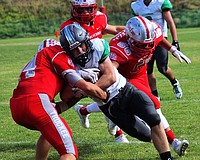 This isn’t the same Wooster football team that served as a doormat to the 3A. Despite losing their first two games of the season, the Colts come into Fallon for tonight’s conference clash much improved from last year’s team as first-year coach Bo Sellers has the Reno school playing competitively. After a blowout loss to Truckee to open the year, Wooster came back with a valiant effort against Elko but lost 20-13 last week.