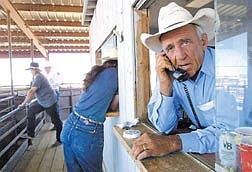 Fallon Livestock Auction owner Gary Snow awaits word Tuesday on the sale of cattle seized by the Bureau of Land Management late last month in southern Nevada. Goldfield rancher Ben Colvin asked District Judge Robert Estes to issue a restraining order to stop the Bureau of Land Management sale. The sale of Colvin&#039;s cattle was blocked. The auction of other seized cattle went on, though no offers were made.