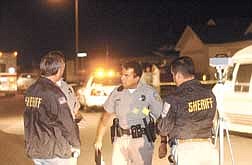 photo Brian CorleyLyon County Sheriff Sid Smith, in jacket at left, talks with deputies at the scene of a Dayton shooting that left a 3-year-old girl hospitalized after she was struck in the head. The shooting is being called an accident, according to Mary Ellen Holly, incident information officer for Central Lyon County Fire. She said charges are unlikely.