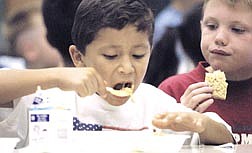 Eduardo Arreola, 7, enjoys his spaghetti during lunch at Mark Twain Elementary on Wednesday. Elementary students throughout the Carson City School District returned to school this week. Arreola says his favorite part of school is eating.