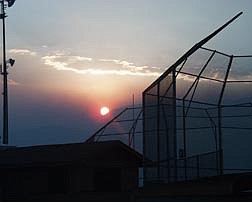 photo Kurt HildebrandA photo of the sun going down in Carson City on Thursday taken from the Edmonds Sports Complex.