Kids take advantage of day off 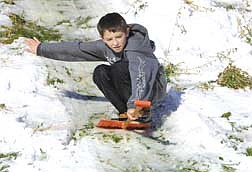 Timmy Karpe, 10, of Carson City, Nev., rides his shovel down a sled hill in a park on Monday morning, Dec. 3, 2001. Carson City area kids took advantage of no school from a scheduled teacher workday and snowfall ranging from six inches in the valley to two feet at the higher elevations. (AP Photo/Nevada Appeal, Cathleen Allison)