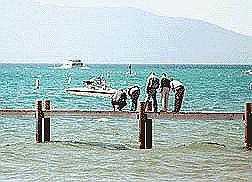 Dan ThriftInvestigators study the scene at the pier near the 4-H Campground beach where two men were found dead Thursday.