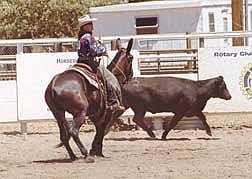 Photo by Brian CorleyTerry Clancy of Bishop, Calif. sorts a cow from a pack of ten cattle at the fairgrounds at Fuji Park. The Fairgrounds along with the rest of the park will go before the Carson City Board of Supervisors.