She said yeas: Man lifted by love -- and a boom 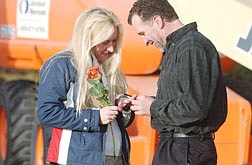 Dina Carrion holds out her hand so that Paul LaPorte can put on her engagement ring. LaPorte proposed to Carrion at her work using a boom to raise himself up to her fourth story office window. Photo by Brian Corley