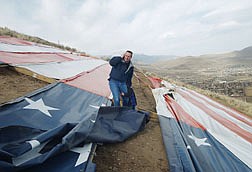 Tod Jennings talks on his cell phone to let others know about damage to the C Hill Flag while trying to shelter his son Noah Jennings, 4, from the high winds. High winds came across the top of C Hill unchecked and tore several areas of the flag apart and caused some damage to the support frame as well. Photo by Brian Corley