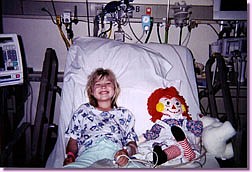 Amanda Stewart, 8, was attending second grade classes at Seeliger Elementary School in March before she was diagnosed with Nephrotic Syndrome. Now forced to live near the children&#039;s hospital at Standford University, Amanda has had both of kidney&#039;s removed. Her mother, Tracey, is there as well, keeping a constant vigil.