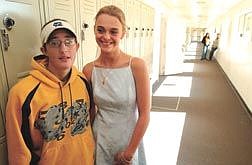 Photo by Rick Gunn.Jolynne Elbert and Carlene Barney, both 16 and students at Pioneer High School, spoke to fellow students about question 2 on this year&#039;s ballot. The two are engaged to be married.