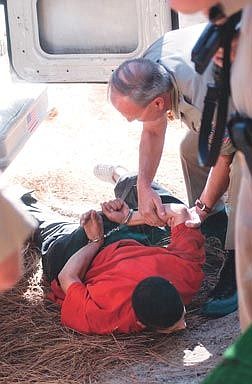 Photo by Brian CorleyDouglas County Sherrif&#039;s Lieutenant Steve Orr arrests a car thief suspect after he fled police along Highway 50 between South Lake and Carson City. After crashing the car and then fleeing on foot, he was found in the back of a van by the owner at the west end of Clear Creek Road with Orr standing just feet away.