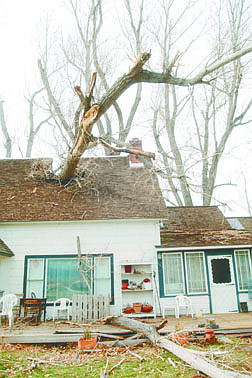 More than 60 feet of tree up to four feet in diameter fell on the Secor&#039;s house in Garderville, smashing the roof and coming to rest on the ceiling rafters Friday afternoon. Despite the extensive structural damage, water damage appeared to be minimal. Photo by Brian Corley