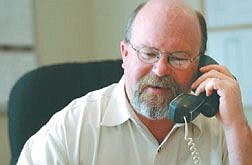 Rick GunnFISH thrift store manager Juan Delgado demonstrates how donations are distributed throughout the store. He is credited with helping substantially increase the store&#039;s business.